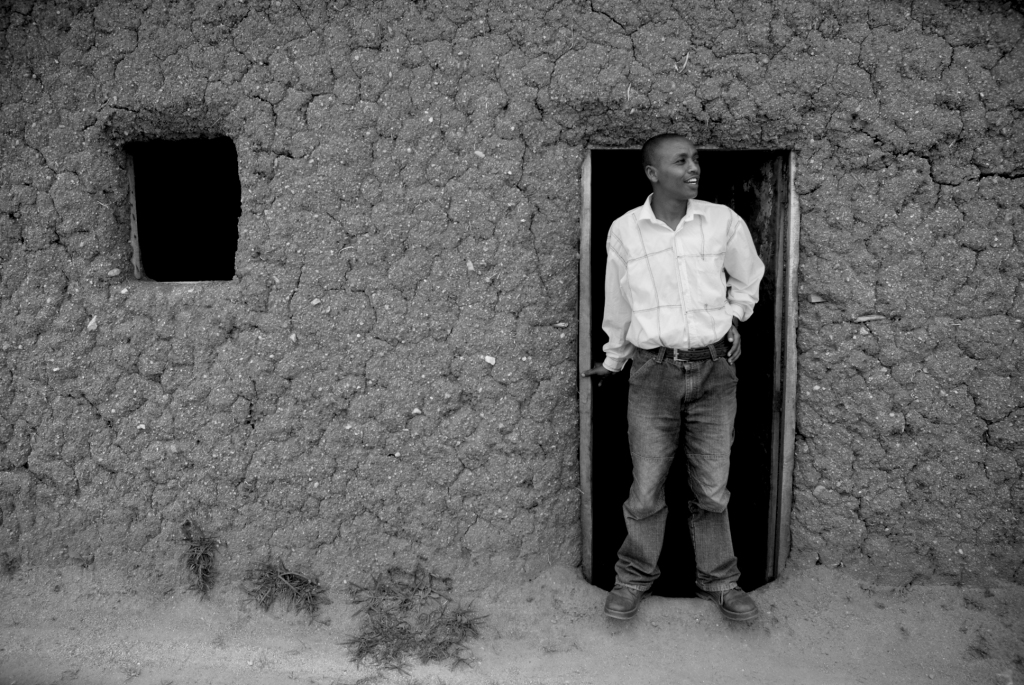 My name is Anne-Marie de Brouwer. I am working at Impact: Center against Human Trafficking and Sexual Violence, where we undertake research & advice, education & awareness, training & capacity building, and empowerment projects & advocacy in the fields of conflict-related sexual violence and human trafficking. I am also the Chair of the Mukomeze Foundation which supports 1994 genocide survivors of sexual violence in Rwanda. We partner with Solace Ministries in Rwanda; a survivor-run organisation that supports Rwandan genocide survivors in a holistic way (physical, psychological, socio-economical and spiritual).

One of the people we support is Faustin Kayihura. Faustin is now 37 years old. In 1994, when the genocide started, he was only thirteen years old. One of the crimes committed against him as a young (Tutsi) boy was genocidal sexual violence by a (Hutu) woman. This woman raped him several times over three days. In addition, Faustin lost his whole family to only survive with his brother. I have known Faustin for ten years now and still see him regularly. I took his testimonial in 2008 for the book “The Men Who Killed Me: Rwandan Survivors of Sexual Violence”. The fact that Faustin spoke about the rapes that were committed against him during the genocide, already back in 2008, was groundbreaking. There are very few men in Rwanda who spoke about the sexual violence they endured in the genocide. In addition, Faustin also chose to have his photo included in the book. For him, and all other sixteen (female) genocide survivors of sexual violence included in the book, the book provided a platform to show the world the truth of what had happened to them. For them, having their testimonials in writing also gave them recognition of what had happened to them and hope that these crimes would be prevented from re-occuring anywhere in the world. Not only was Faustin very brave to share his story with the world, he also talks about it with other genocide survivors when he meets them in counselling sessions at Solace Ministries. Because of this, several other men have also opened up and told their stories of genocidal rape.

When I was recently approached by the organizers of this symposium, they asked for Faustin’s intervention via Skype during today’s symposium. Faustin agreed. Last week he visited Solace Ministries to hear from the head counsellor the questions that were going to be asked by me (as requested by the Centre for African Justice, Peace and Human Rights). However today, while I was on my way to this symposium, I received word from the staff at Solace Ministries that Faustin no longer felt comfortable speaking about what he endured as a survivor of genocidal sexual violence. Although Faustin had travelled a long distance from his home town (in the countryside) to Solace Ministries in Kigali (the capital), on the bus he started to feel uncomfortable about the idea of going on Skype for an unknown audience far away. To me, and I believe for all of us, this sudden decision of Faustin can only be respected. In fact, it shows how difficult it is to discuss openly about male sexual violence! The very reason why this symposium was organised. Although Faustin had been in the spotlight of the international community because he wrote down his story in a book (together with a picture) and is an example for other male survivors of genocidal sexual violence to speak up, it proved to be a bridge too far to be interviewed by Skype today. Again, this doesn’t say much about Faustin; the decision to talk about such very intrusive and shocking events can only rest with the person who suffered from it.

As I was supposed to introduce him and ask him the questions from the Centre, I will try to contribute as good as I can on Faustin’s behalf. I will therefore read out part of his testimonial from the book “The Men Who Killed Me” and also give you his written answers to the questions. These were just sent to me from Rwanda.

To conclude, the testimonial of Faustin was taken ten years ago. Since then a lot has changed for the better. Faustin regained trust in women; he got married and has now four beautiful children. He makes an income by working on his own land where he grows peanuts and beans, which he sells. He also has a cow that provides milk and some income by selling the milk. His dream is to build also a small canteen where he sells food and tea, which will further help him in his development. With the support of the wonderful staff at Solace Ministries, he has again a family. Solace supports him, together with the Mukomeze Foundation, so that he has again hope for the future.

Here follows a small part of Faustin’s testimonial from the book “The Men Who Killed Me”: 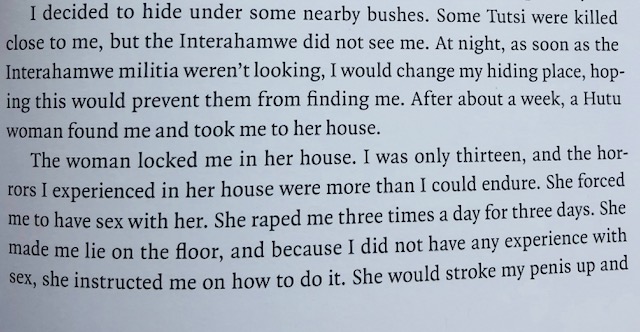 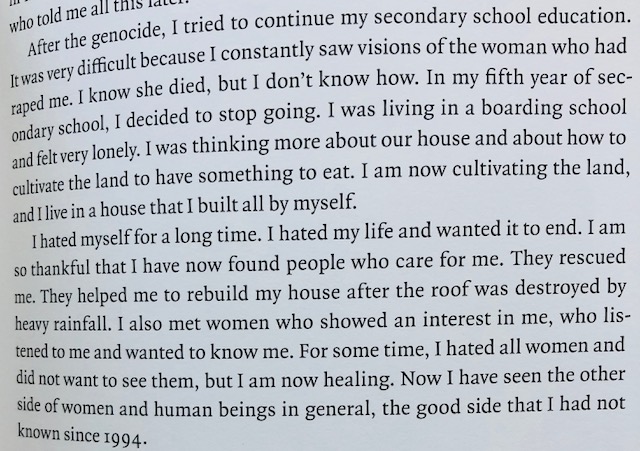 Written response of Faustin Kayihura to the questions of the Centre for African Justice, Peace and Human Rights

(1) What did you experience as a (male) victim of rape in the genocide?

(2) Have you been able to overcome this? And if yes, how?

Faustin: “Constant counseling and prayer helped me. With spiritual and physical support, I regained strength. Encountering with other people who we share the same fate in group counseling also helped me a lot to feel much better.”

(3) What are/were the social, legal and medical challenges faced as a (male) victim of rape in the first years/period after the genocide?

Faustin: “Social challenges: In our culture a man is considered to be powerful: to provide security, by defending himself and others. So in my case, of being raped by a woman, it left me with an understanding that I was not a man any more. Feeling powerless and useless, I had no words in the midst of men. People who know my story of rape, being neighbors and others, I felt I could not be with them. I felt isolated. This caused me to feel bound, with no freedom to be of any use. Legal challenges: I got justice because the woman who raped me underwent through the Gacaca Court rejudiction and she was sentenced. Medical challenges: I developed some pains and diseases. I went through medical checkup and was given a health care for free by the government survivors fund. This was because of rape in the genocide against the Tutsi.”

(4) What are the challenges you still face today as a male survivor of rape?

Faustin: “Memories that I deal with on a daily basis.”

Faustin: “Male victims of sexual violence suffer in silence because they are men and think that testifying about it will take away their dignity. Yes, they should speak out because otherwise they suffer in silence and this may cause post traumatic disorders. Another thing is that the world should be aware/know of the genocide and sexual violence committed against male victims.”

(Impact is about to start a crowdfunding campaign in order to update the book with the stories and portraits of the survivors ten years after they were first interviewed, in particular to show the world how the peoples’ lives unfolded and to show their resilience and strength) 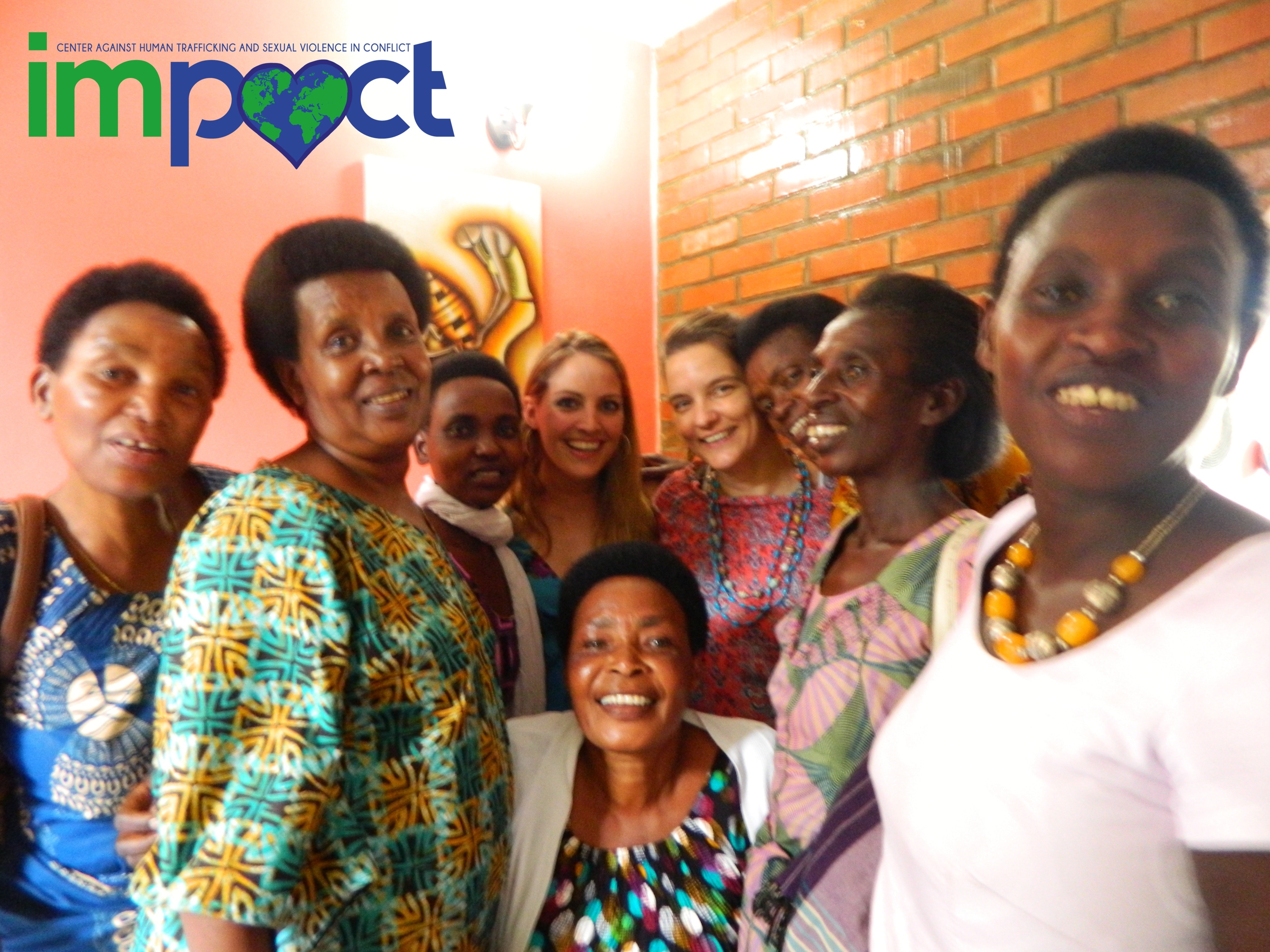 Join IMPACT in Celebrating PEACE on the International Day of Peace 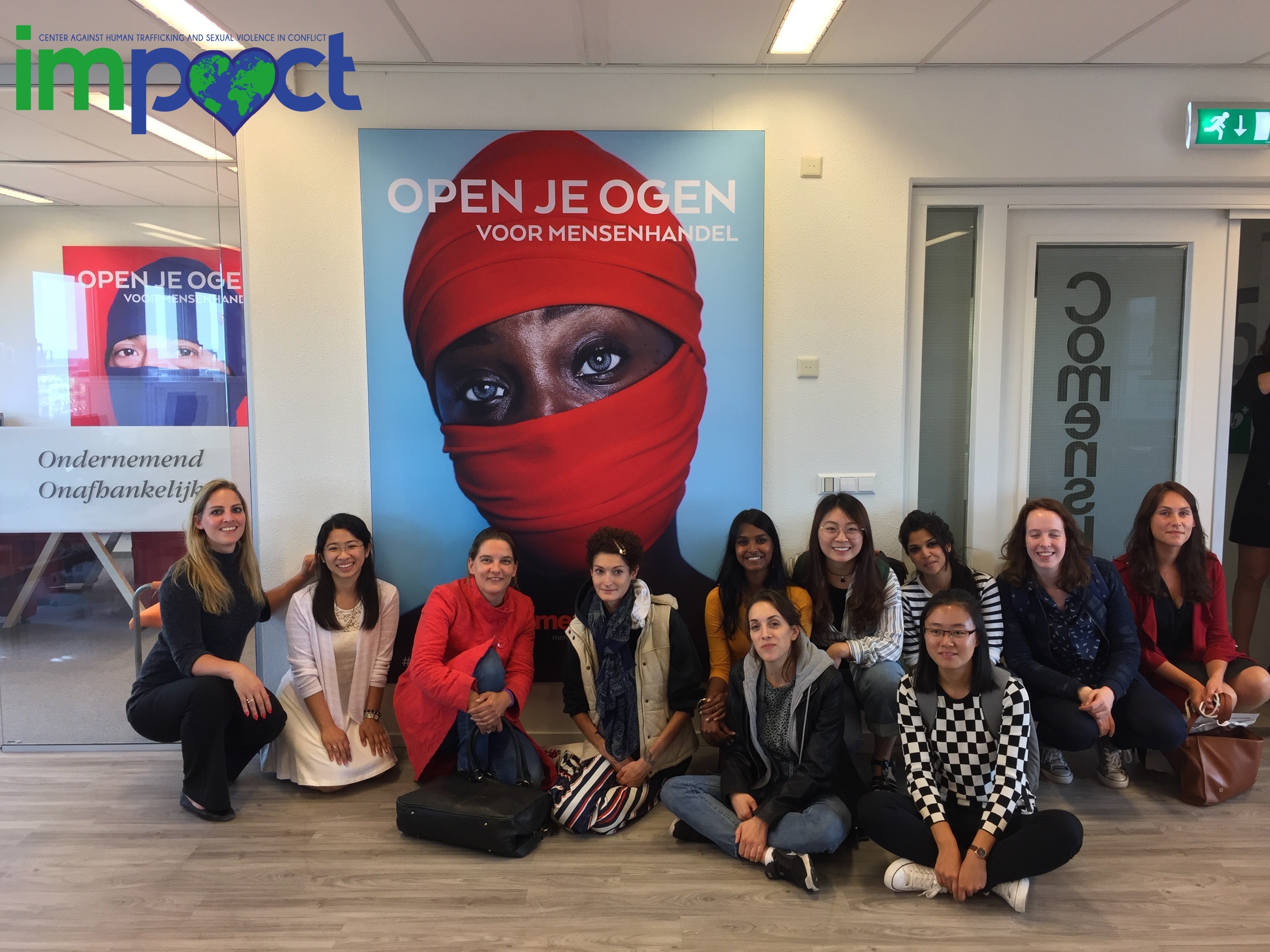 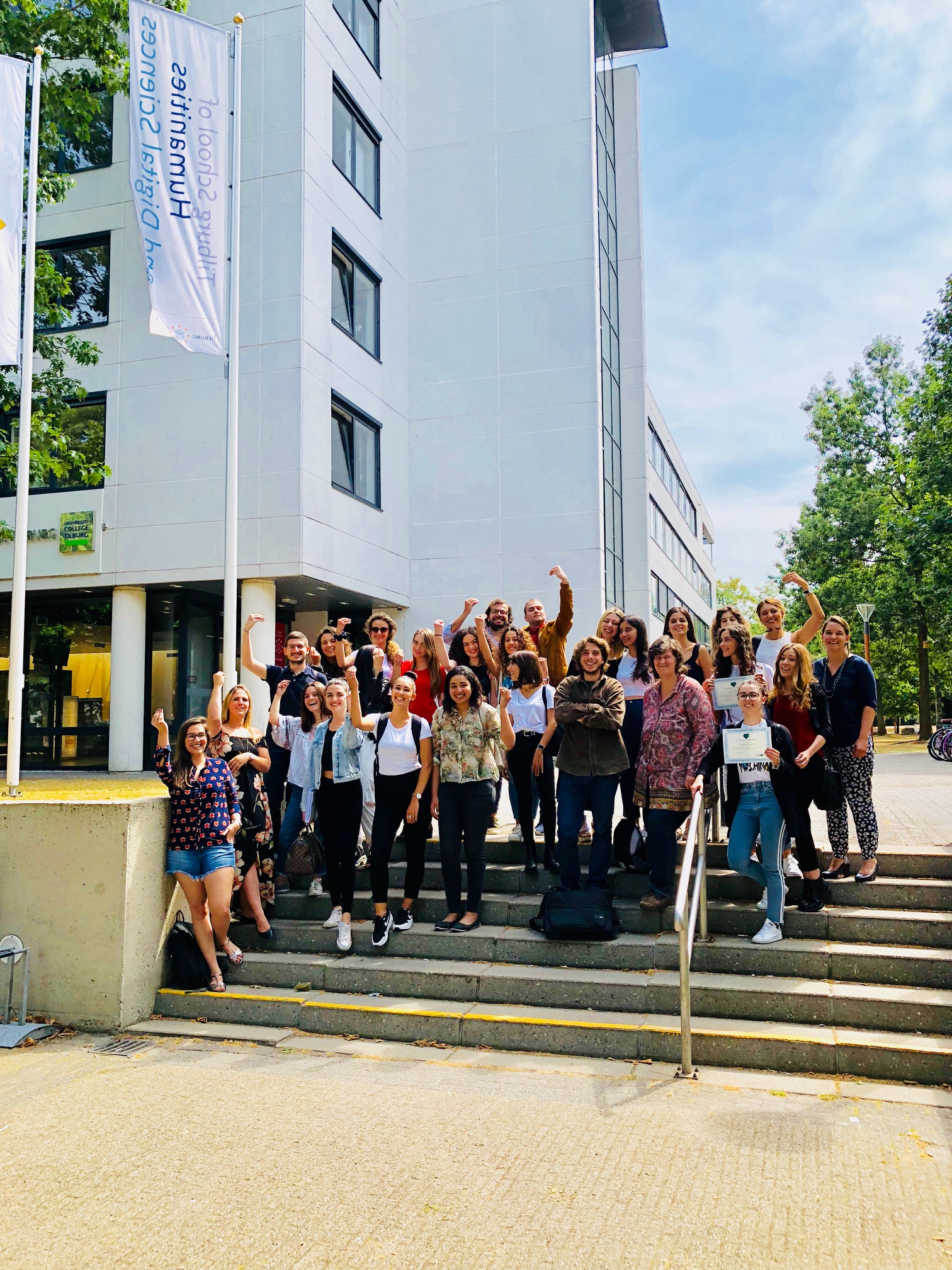